Sandbach Animal Rescue Society (SARS) was set up in 1981 to rescue and re-home stray and unwanted domestic animals of Sandbach and the surrounding area. It is run entirely by volunteers and relies purely on fundraising and donations to cover its costs.
SARS accommodates and rehomes rescued cats at its base in Sandbach, and we work together with other organisations to help rehome other animals too. 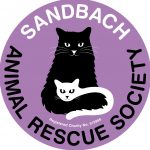